OO-BOP-SH’BAM have been recognised for some time, as one of the best UK and European, 1950’s Style Rhythm and Blues, Jump Blues, boogie and Rock and Roll bands . They are based in London but have performed all over Europe at festivals as well as regular appearances in well known clubs such as the famous 100 club and at private parties. 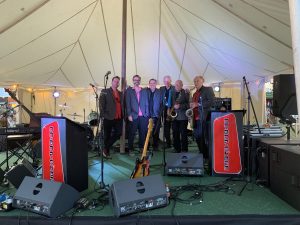 We took our name from that great jazz classic by Dizzy Gillespie. We have all been influenced by those great 1950’s RnB and Swing bands, that featured rocking rhythm sections, and honking saxophones,  like Wynonnie Harris, King Curtis, Roy Brown, Rosco Gordon, Fats Domino, Fats Waller and many others . We have also been influenced by the great blues artists of those times like BB King, T Bone Walker, Johnny Guitar Watson, Jimmy McCraklin and Big Jay MacNeeley and in the Rock and Roll  department, Elvis Presely, Bill Hayley and the Comets, Little Richard, and many more.

The band has picked up lots of work over the 15 years and played a lot on the Jive circuit, where we have become firm favourites, as we play at just the right tempos for all kinds of Jivers to take to the floor. We travel the length and breadth of the UK to play at the various Jive events. We also play at some of the great festivals such as Twinwood, Derry Jazz Festival, Northern Ireland,  Silda Jazz Festival in Norway, Cognac Blues Festival in France, The Guiness Jazz Festival in Cork Southern Ireland, TanJazz, Tanjier, Morocco, Goodwood Revival and Glorious Goodwood and many more and we are continually asked back. We also have played and still play at some of the best clubs in London such as The 100 Club, The Hideaway, Boisdale,The Rivoli Ballroom, to name a few.

It is while playing at these festivals we have met and become friends with many of the other top bands such as The Jive Aces, Laura B and the Moonlighters, The Cadillac Kings, Si Cranston, James Hunter, King Pleasure and the Biscuit Boys,Big Boy Bloater and Imelda May to name a few.

Over the past years we have had a few musicians leave and new ones join but the standard of the band never changes, it is always 100% top quality and has kept the band sounding fresh. 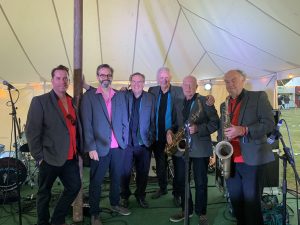 However, the current line up, and the one that has been steady for the past few years consists of Malcolm Barclay or Pete Mathison on guitar and lead vocals, Liam Grundy on piano and vocals, Peter Pritchard or Ben Martyn on either double or electric bass and vocals , Alby Green on tenor sax, who has been with us for nearly all of the bands existence and Dave Eastham also on Tenor Sax and myself Alan Savage on drums and backing vocals.

Our latest Album is  “We’re Gonna Ball Tonight” which can be bought from this website. 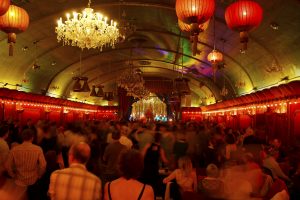 This photo was taken at The Rivoli Ballroom when we broke the attendance record, that’s us in the distance in blue shirts.

This year has been a crazy year not just for us but for all of the bands as the Covid – 19 has meant all gigs have been cancelled, for us we have had The Goodwood Revival Festival cancelled and The Tanjazz Festival in Tanjier both firm favourites of the band.

We can only hope that 2021 onward will return to some kind of normality! fingers crossed!!

Drummer Alan Savage has assembled a cooking little combo including boogieing pianist James Lunn, a flexible double bassist in Dave Lagnado, ace guitarist Paul Garner who has those Tiny Grimes/T-Bone Walker stylings off to a ‘t’ (listen to the ringing tones of “Just Love Me Baby”), plus the fat horns of Andy Dummett (tenor and baritone saxes) and Jules Webster Greaves on tenor. Oh, and Ray Gelato contributes the sleeve notes and fine tenor on two tracks.

Now these guys know what it’s all about – which is perhaps no great surprise as their collective experience includes the Rolling Stones, Van Morrison and Freddie Mercury right through to Solomon Burke, Hubert Sumlin, Otis Grand and Paul Lamb. OO-BOP-SH’BAM is a name to watch – and a group to hear. O’vouty? Rating: 9
Norman Darwen, Blues In Britain magazine, Issue 57.

At first listen, the impression was of just another jump outfit going through their paces, regurgitating a bunch of jump r&b classics, which often works well onstage, but not to often on record. However after a few plays, I realised that we have here some seriously good musicians who have studied the idiom and, seemingly effortlessly, can replicate – or even surpass – the original versions.

Particularly impressive is the tenor playing of Julian Webber Greaves and Andy Dummett, both of whom have respectful track records in various bands.

If they come your way, be sure to catch them and pick up a copy of this CD at the same time.
Tony Watson, Blues & Rhythm Magazine.

Produced by Alan Savage and Nick Taylor, this 14 piece offering is slick smooth and enjoyable from sleeve through to track 14.

The content of the album appears to be offered to certain tempo jivers and r’n’b listeners who like their covers done in an inoffensive style, I found the album to be a toe tapper.

All tacks are executed well by good musicians, with the added bonus of an appearance by the one and only Ray Gelato on tracks 10 & 12.

This is and will be a hit with jive clubs across the lands for sure as the tempos are well suited for the dance market, which is demonstrated by the number of gigs they are getting within this domain.

On the other hand, if you want to listen to some good time r’n’b you’d do no wrong by slipping this onto the Hi Fi.
Mad Rat Magazine.

“Thanks for the cd.
I was very impressed with the quality all the way thru’, no let down on great rockin’ R&B, Lilie Mae should make a good club jiver.”
Bob Thomas, Bim Bam Records.

“I got the CD album thank you and enjoyed it very much. The production is very good and so is the material. I’m a Smiley Lewis fan and it is always good to hear “Big Mamou” and “Lillie Mae”. I particulary enjoyed Tiny Bradshaw’s “Breaking Up The House” (brilliant boogie woogie piano!), Roscoe Gordon’s “Just Love Me Baby” and “Let ‘Em Roll… For Big Joe” is a nice touch and I will be playing the latter two tracks at The Jive Ball in Letchworth on Saturday night. “Kidney Stew” is a track on the demo CD you sent me which I have already played in public two or three times. I’m looking forward to hearing Alan’s “I Like To Bop” at our live show in September and of course meeting you and the boys then if not before.
Good luck and best wishes to all associated with the Oo-bop-sh’bam project.
Thanks again.”
‘Strollin’ Steve Ashdown, Allways Music, www.strollinsteve.co.uk

That’s is one gas of a CD you have sent me.
Who would have thought that a British band could sound like this?
Excellent stuff with the all-important vocals even better.
Good enough for Atlantic mid 50s in my opinion.”
Paul Barrett, Top Promoter.

This is an absolutely great cd and I really love to play it as loud as possible”
Markus Gygax, Swiss Promoter.

Guinness Jazz festival Barry’s Bar “You were great the best band we have had here for over 5 years, we are definitely having you back next year.”

Guiness Jazz Festival Committe “The name OO-BOP-SH’BAM is on everyones lips, we have had nothing but great reports about the band ”

Ben Mouling of Radio Modern promotions Belgium ” I have run 21 of these shows and this is the best band I have had by far, they are great, what a fantastic night we all had, I will bring them back very soon.”

Bernd, Promoter of The Blue Shell Gig, Cologne Germany “You guys were great, fantastic, it was a brilliant night and you have made lots of friends and fans here, we will get you back very soon”

Derry Jazz Festival John manager of Quay West ” You guys were fantastic, I want you back here again next year.

Manager of the Metro Bar, Derry” You guys are fantastic you don’t just come and play music, you play with passion and energy, we have never had anything like you here before, Brilliant.